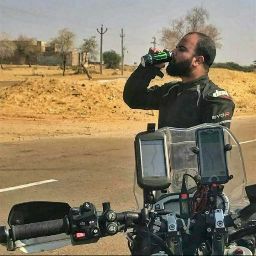 A Swiss knife! Yes, that is exactly what I think of the Triumph Tiger. It can oblige you for an easy 1000km ride over a day. There is no doubt you can take it off the beaten path, on any given Sunday, and she will be ready on one wheel to get dirty with you. She’d be more than happy with you taking the long route home, be it after a long tiring day at a keyboard or even after you’re done running errands. Put her in any situation and she will come through like a hot Swiss knife through butter! However, it does not make any sense if one does not know how to handle a knife, let alone a Swiss knife.

Enter the Triumph Tiger Trails. A four-day event that took us through the royal locales of Rajasthan. Not to mention the varied, treacherous, unforgiving, sometimes mellow terrain that Rajasthan had to offer, be it the dunes or the vast salt flats of the Sambhar Salt Lake apart from the smoothest tarmac Rajasthan has to offer on roads carving through miles and miles of dry barren land. But as far as I am concerned, I rode the Triumph Tiger for the first time in the sand, and this is my story.

The ride was flagged off from the Triumph showroom in Morani, Jaipur. There were a total of 19 riders who started on their Triumph Tigers. And because this was a ride organised for Triumph Tiger customers to know more about the how-tos on their motorcycle, we got to see the Tiger in all its variants and iterations. And then we set off for Bikaner. After tackling a bit of Jaipur city traffic in the wee hours, we got onto the arrow-straight blacktop to get to the Sambhar Salt lakes. On the way, the riders brushed up on some basic skills related to group riding. They rode in a formation, gave hand signals and smiled and waved at people who were obviously stunned to see so many Tigers out on the road.

We reached the highlight of the day, the Sambhar Salt lake, after riding for 88km. Here our Adventure columnist, Vijay Parmar, took all of us through a basic training course on how to ride on a hard surface which included a briefing, a demo and practice session. The participants were briefed on how to place themselves, hold the tank, hand position, where to look and how to prepare themselves mentally when it comes to going off the road. The participants all got an hour to practice on the vast expanse of the salt lake where the terrain was nothing close to the soft sand that one gets to see in Rajasthan. And that was the plan. To try and test your skills and the motorcycle on different terrains Rajasthan had to offer.

The convoy then headed straight to Bikaner via Nagaur where we all witnessed a sunset like never before. Good thing the stay for the day was along the way to Desert Glamping in Jaisalmer. After a good session in the salt lake and ride of 404km, we stopped at the Heritage resort in Bikaner.

Early morning sunrises are one of the best things to experience in Rajasthan. And nothing comes close to the sunrise and sunset Rajasthan has to offer in its vicinity. Apart from a visit to the Thar desert for some dune-bashing!

The destination for the day was Desert Glamping in Sam, Jaisalmer where one gets to see some fantastic views of the sunrise and sunset. And the distance that we did on this day (400km) was almost the same as our first day. The plan for the day was to go dune bashing in the sands of the Thar desert, which turned out to be a task for almost everyone. Why? Not because it was the first time everyone took their Tigers in the sand, but because the sand makes it look easy. And it isn’t. “Never take sand for granted,” said Vijay the moment we entered the Thar desert. The technique to ride on the sand is to go easy on the handlebar, look where you want to go, hold the tank and mainly, don’t panic if you feel you’re losing your balance and are about to fall. Just look where you want to go, and all will be well. After a good two-hour session (including Vijay’s demo in the sand), the convoy got busy trying to implement the tricks on their motorcycle. At the end of the day, we headed to Desert Glamping where an extra day’s stay was planned.

Today was an important day. A much needed break was required for the group as we not only rode 400km in a group, but because of the off-roading part that really exhausts you especially if you aren’t a pro. And because we had the whole day at our disposal, a quick ride to the Longewala War Memorial was planned. But again, a day cannot be done without some dune bashing in Rajasthan. So a plan of visiting the local dunes was made, as we just had 274km to reach Longewala. Today there was no training plan as well, so everyone got a good couple of hours to go practice in the sand and get to know more about their motorcycles. After a couple of days’ group riding and dune riding, the participants seemed to have a good control over the Tiger along with confidence in group riding as well. The whole convoy managed to increase the average speed and started covering more distance per day.

The roads to Longewala and back are not the typical ones you’ll find in Rajasthan. There are barely any straights on the route and the way the participants had built confidence in themselves, the types of curves and variations in terrain, did not matter. After a slow lunch at Ramgarh, we headed to Longewala to pay a visit to the place where India won the 1971 war against Pakistan, and started for Desert Glamping as it was getting dark already.

We were back to riding for a good long distance again. Today we were looking at doing 400km again. Of course the participants were all ready, happy and excited to get back on the saddle after a day’s break and ride! However, the sad part was that this was the last day of the ride as we were heading to Bikaner today to conclude the Triumph Tiger Trails. What kept us all energised and pumped was that we still had a good 400km to go before we all got together in Bikaner to share experiences and spend a good night. While heading back to base we started from Sam near Jaisalmer stopped for a much needed refuel and then headed for Bikaner via Mohangarh–Nachna–Bikampur and Bap. After reaching Bikaner Triumph distributed certificates of participation while everyone shared their experiences and new learnings amongst the group which they had earned during the Triumph Tiger Trails. At the end, they thanked Triumph and the entire group of Xplore Earth who was the support team for the Triumph Tiger Trails without whom the ride would’ve been a lot harder. Today they were better at group riding. They were faster, safer and more importantly knew how to handle their motorcycles on and off the road. And this isn’t the end of the story. This where it all begins for the Tiger owners.

And of course, a lot of credit goes to the motorcycle itself. The Triumph Tiger, as the name suggests is majestic but never did it intimidate me or for that matter, anyone else. The superb low-down grunt of the triple along with the brilliant ergonomics kept me all going without any hiccups. We’ve said it earlier and we’ll say it again. The Tiger is one bike that can do almost everything. Especially in India.

“On one day we do a 24-hour run, we don't stop” says Santhosh Vijay Kumar about the 90° South - Quest for the Pole ride

Best 125cc bike for you: TVS Raider vs Honda Shine vs Bajaj Pulsar 125 vs Hero Glamour