In a quest to find the Royal Enfield Himalayan’s natural habitat, we set out for a 12 day Tour of the North East 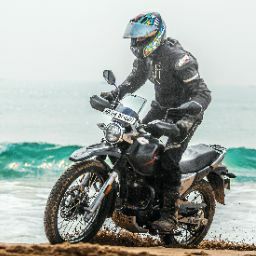 “Take only the memories, leave only footprints”, erm... tyre marks in my case, which was exactly what I did when RE invited us over for the Royal Enfield Tour of North East 2018. To be very blunt, I was no stranger to the Himalayas but the North East was a place I’d never set foot into. However, the editor clearly mentioned ‘on a motorcycle’ to which I went ‘hell no!’ (I’m a scooter guy) and then the boys said “you’d be riding a Royal Enfield Himalayan”. I was then mildly convinced and extremely stoked about the getaway from my chaotic and dreary urban life cycle, away from clouds of diesel smoke and into the puffy pure white clouds over the mountain peaks.

What also hit me was that when four wheels turn to two, it’s a whole different ball game because the motorcycle and you are now one god darn soul my friend. Up until I boarded the flight from Pune to Guwahati (Gau-hati), I was contemplating the fact that I’d be traversing up and down three states that were blessed with the best of roads on a motorcycle. But for all the doubts I had in my mind, Royal Enfields’s dedication and planning for close to 32 riders was just overwhelming. Huge applause to the Royal Enfield Gun Wagon for having our backs at all times, no matter what terrain.

We started off the expedition from Guwahati where the motorcycle and gear scrutiny took place along with first-aid training and a ‘very strict’ briefing. Strict in the sense that we would need to ride out at the given time and not five minutes later. I was handed the keys to the Himalayan Sleet that I’d be riding for the next few days, which I then took for a quick fuel up and to get a grip of this new found saddle. Wait. Those loud pops. That is not a stock exhaust! And this is the Sleet variant. The livery and the exhaust made me anxious, despite it being a 24bhp single. I had to be brave. And just like that the following morning we set off for a 200km opening ride to Shillong via some beautifully paved highways between the mountains.

The ride to Shillong was a fairly easy one. As we moved out of Guwahati city and to the flat highway, I was surprised at how this 190kg adventure motorcycle handled the mountain twisties that the long stroke 411cc motor delivered adequate thump. Little did I realise, we had already reached Jorabhat which was in Meghalaya. We kept on the tarmac and cruised through Shillong to Cherrapunjee. Caught a glimpse of the majestic Dian-Thlen waterfalls plunging from Cherrapunjee’s clifftops, after which we darted back to Shillong to rest for the night. The ‘supreme leader’ announced that we would log close to 260km on the next leg of our journey, in an effort to witness one-horned rhinos, whose population has been on the rise at the Kaziranga National Park. The 260km sprint was fairly easy and relaxing. Vast forests engulfed the roads and frequent sign boards reminded us that this was an ‘Animal Corridor’. And then the roads got me. I hadn’t realised that I was riding alone with no one in sight and I overshot the resort by 23km! At least that’s what Google Maps suggested! I double checked the maps and with passers by at Kohora market and swiftly rode back to the resort. RE had scheduled a Jungle Safari, as we had expected. It was already 1500hours and we hoped to get there before the rhino’s caught some sleep.

The next day, we were back on the road, crossing the roads to Kaziranga going towards Nemati Ghat. Once we made it to the ferry point, 32 bikes were locked and loaded for the world’s largest river island, Majuli, which was waiting for us. Majuli is one amazing island, disconnected from the rest of the country making for a peaceful getaway. But the valleys that lay ahead had my eyes glittering like a kid in a candy store.

We travelled from the world’s largest river island to the eastern Himalayan valleys of Ziro at Arunachal Pradesh. Breathtaking views and winding roads made me stop at every corner just to look down and realise what a monotonous life we live back in the urban jungle. The temperatures were dipping. Yes, temperatures below 13 degrees are extremely cold for a Goan and anything below 6 degrees celsius is suicidal. The ride up to Ziro was tricky; clean winding roads with sudden loose gravel patches. But nothing that the Himlayan couldn’t handle and 200mm of travel at the front made the potholes and bumps an easy peasy affair.

Royal Enfield Tour of North East 2018
Beautiful Tawang
Once we crossed the marvellous looking arc and got onto the little city roads of Tawang, I opened up my visor and looked around in awe. What is this place! I honestly couldn’t get over it. Such a small happy town, with legit one way roads that lead exactly to where you started. So well planned. The same night we touched down at Tawang, we left for the Tawang Festival, a happy music and food fest. For all I know, no one could get their eyes off the RE Himalayan. The next day we were absorbing blessings from the second largest monastery in the world. There’s something about a Buddha idol that instils a positive vibe in you, whether you believe in it or not.
Royal Enfield Tour of North East 2018

All I needed to do was stand up and give it the gas, pushing it down like an MXer in slippery corners. I get it now; the Himalayan was built for this, for the mountains and the terrain that comes with it. The next few days travelling to Dirang and Tawang, we would indulge in exhilarating views as we rode through winding roads alongside the Brahmaputra river. To get from Ziro to Tawang, we had to make a compulsory stop at Biswanath Chariali for one night and then set off early morning traversing the high mountain roads of Bomdila until the paved roads of Dirang.

I realised that I had overdosed on juicy meat momos. The rider in me now rarely stood up, except when a bad patch arrived. Sela Pass which is 13,000 feet high was our “must cross at any point” when riding to Tawang. We had to make sure we crossed before the weather gods had their mood swings. I did see a massive cloud hover over us, and a few snow crystals on my head after which it was a bat out of Sela. Sela pass got our pulse racing, so much so that we crossed it twice on our way back to Dirang. What dare devils we were.

Back to reality, it was

It was time. Just when we were all getting to know each other, the roads came to an end, the mountains turned to concrete blocks and the fresh air was replaced by choking scandalous smoke. With a heavy heart, all the riders reached Guwahati. Even though it was a long 330km ride, we gathered up the last functional tissues in our limbs to get the ceremonial flag down. On this exhilarating 12-day trip, we had covered 1,970km, hopped in and out of three states and made countless memories. As much as I would miss the people and the breath-taking views, I would miss my two-wheeled unicorn the most.